TREATMENT OF PATIENTS WITH GASTRIC CANCER COMPLICATED BY PERFORATION

Materials and methods. The study is based on the analysis of the results of treatment of 19 patients with gastric cancer complicated by perforation, who were treated at the “State Institution «Zaitsev V.T. Institute of General and Urgent Surgery of National Academy of Medical Sciences of Ukraine” from 2011 to 2020 aged 18 to 85. All patients were divided into two groups: comparison — 9 (47.3 %) patients (were treated from 2011 to 2015), the main — 10 (52.7 %) patients (treatment period from 2016 to 2020).

Results and discussion. In the comparison group, conventional surgical tactics and operations were used. The main group used active-individualized two-stage surgical tactics, which involve suturing a perforation hole in the first stage and combined and reconstructive surgery in the second. Radical operations were performed in 10 (52.6 %) patients; in 9 (47.4 %) — palliative and symptomatic. Postoperative complications occurred in 5 patients (26.3 %), postoperative mortality was 26.3 % (5 patients).

Conclusions. In patients with gastric cancer complicated by perforation, in a serious condition of the patient and the presence of diffuse peritonitis, we consider it appropriate to use two-stage surgical tactics. The introduction of the proposed surgical tactics and new surgical interventions helped to increase the number of radical operations from 4 (21.0 %) in the comparison group to 6 (31.6 %) in the main group and reduce postoperative mortality from 15.8 % to 10.5 %, respectively. 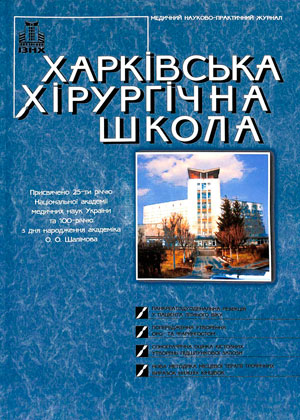